By now I’m sure that most everyone has heard of the Microsoft Exchange vulnerabilities, and hopefully addressed them in their systems. Still, it's definitely worth looking at what these vulnerabilities and the age of the systems they were on says about the temporal complexity of today’s attack surface.

It’s easy to get caught up in the shiny, newness of the technology landscapes we create during this age of digital transformation. So this zero-day is a great reminder that while newness is certainly important—we also need to keep looking for those aging systems that may be tried-and-true, but need to be upgraded or replaced before they are forgotten paths of least resistance. And if they cannot be upgraded and replaced, put them behind a firewall or VPN gateway and supply some good agent-based monitoring or network intrusion prevention, or closely watched logging for anomaly detection. When old systems start doing new tricks it is probably not good.

According to plenty of reporting on this subject, exploitation of the flaws was first noticed at the beginning of January, and since that time the traffic has increased by orders of magnitude.  A sophisticated group of attackers out of China dubbed Hafnium initially used these vulnerabilities, but now it’s a free-for-all as other groups attempt to grab MSE real-estate and launch further attacks from these persistent, sometimes mission-critical beachheads.

What is also pretty amazing about this activity is how quickly it moved from unknown to automatically breached. Over a matter of days the number of potential victims went from 30,000 to 60,000 or more, and organizations are still scrambling just to identify the targets in their attack surface to protect them, all while the malicious actors leverage automated scanners and scripts to easily find and exploit targets.

Vulnerability scanning and penetration tests provide security hygiene, but not a full picture of what attackers are most likely to target. Using CyCognito to understand the risks that are present informs how to scope a pen test and even select the methodology.

By using the CyCognito platform’s unique attack surface graph mapping discovery engine our customers have the essential information they need to find all of the assets in their attack surface that may be compromised by this attack. The choices then are to: patch the system or take it offline. By the way, I found it heartening that it took a bit of hunting to find example systems in order to take the screenshot because most were simply taken completely offline by our customers. In the CyCognito platform today this was the view for one customer: 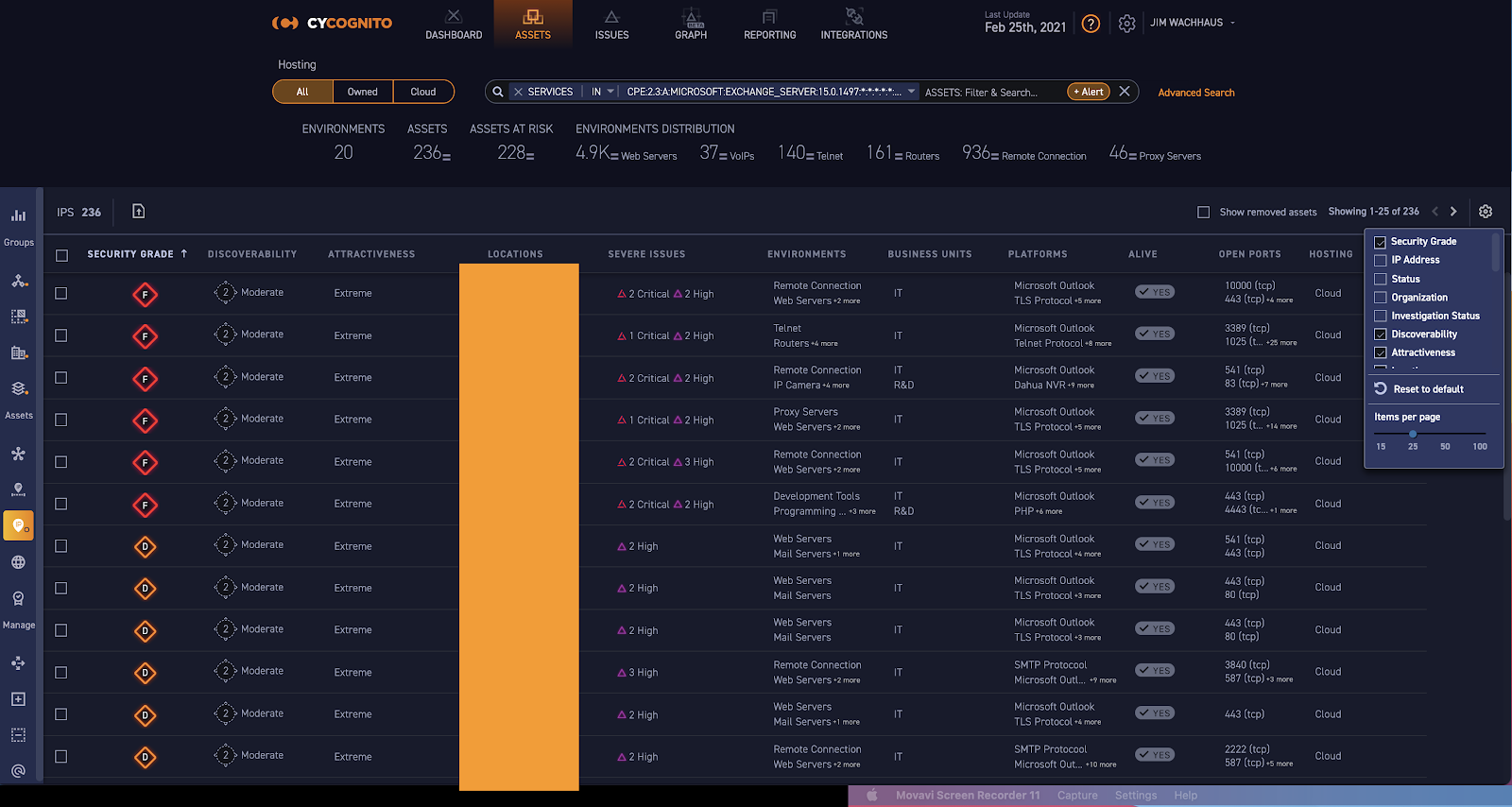 Takeaways and Next Steps

If you weren’t using the CyCognito platform before this attack, then I hope you were using some other e-mail system, or any of the many solutions available like Google or Microsoft 365 which were unaffected by this.

If you were, by chance running MSE, and certainly, if you’re running older MSE systems, there may still be time to identify these systems and patch them or "nuke them from orbit"...sometimes it’s the only way to be sure... as noted in this famous quote from Ellen Ripley (Sigourney Weaver) in the movie Aliens, just a few days late for International Women’s Day.

And if you’re interested in seeing what CyCognito can do to help you know all of your internet-exposed assets, I recommend you watch our 8-minute demo video.

Jim Wachhaus, Director of Technical Product Marketing, has been in technical roles on cybersecurity products for over two decades and is passionate about the discipline of cyber system defense.